"Once, our power spanned millennium. Now...We are but Thirteen."

The Citadels were a family of opportunists who emerged during the time of the Treaty of Corusant. They consisted of both Jedi and Sith, Hunter and Agent, and every member claimed to possesess some sense of force sensitivity. Because the House contains not a single women, children are either adopted, or make in ritual, as Darth Santificus was, however The Head Citadel may choose one to declare Head Mistress Citadel, whom shall rule jointly with him. The name Citadel itself comes from the last name Alesis gave himself, to represent the amazing tolerance he had for rage, hatred, deceit, and other powerful emotions directed at him. (NOTE "†" denotes a deceased member of the House.)

The Structure of the House In the Age of the Xenocide

The power of each individual member of Old House of Citadel was highly determined by age, generation, and experience. However, every Citadel Had a unique role in the hierarchy, and was reliant on other parts for direction. Overall, there were the Heirs of the Secrets, The Members of the Inner Circle, The Watchers, and The Family of House Citadel.

The Heirs of the Secrets

The Heir was the official title of The Head of House Citadel. He had both the complete jurisdiction and control of the House's control, from forces to The Palace itself. He is supreme in every aspect. To gain this rank, the previous heir must be incapacitated or dead, and traditionally also have passed down the Secrets of Citadel itself. In this Era, two Heirs have been recorded. Note that each Heir also takes on a unique suffix to their reign, which is the signified totem of their rule.

The heirs of this age:

The inner circle are 6 members of the family with the highest power and responsibly in the House, ruling as a almost a council, with the heir as leader.

The Six of the Circle

The Watchers were equivalent to Ciphers in the Sith Empire, but coincidentally also function as their name-sake suggests. They are quite intelligent, but their force potency is quite rare, Often User's of the force can channel through them, enhancing natural skill and abilities. From Henceforward, some of these catergories contain members who are not of distinct blood (Erasis' toons.)

These were the source of House Citadel's power. These beings were the font of all Alesis drew from, and were the truest secrets of House Citadel. These beings were how Alesis manifested his unique power in the way his house had been possessed. Their weakness was that if one of the three faltered to maintain balance, the other two would fall. Thus, when Nuetrality was destroyed..the balance of the other two became untamable, resulting in their lock-up.

[Top] Alesis in rigor mortis. [Bottom Left] Alesis as he was seen before Desocratos went into coma. [Bottom Right] Alesis, struck down by Emperor Salvatus. 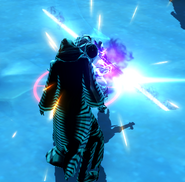 From Left to Right: Erasis as he gains power from the Original Dread Palace; Erasis as he appeared winning the Praetorship; Erasis dispelling Alesis' final attack.

The Structure of the House Post-Citadel War

When the Emperor Salvatus struck down Alesis, Desocratos inherited his rank and secrets and power. He chose a new name, Citadel, and with it, took on the task of restoring and rebuilding the house. His first act was to abolish the womenless rule, taking on his Wife, Ray'ak Athan. Santificus began to travel abroad, and brought the legacy everywhere. Erasis began to detach further, speaking less to even his other half.

Community content is available under CC-BY-SA unless otherwise noted.